I was sick this weekend. Some sort of mild stomach bug that was really more of an annoyance than anything.  Because I didn’t want to give it to anyone and I wanted to kick it fast, I stayed in all weekend, lounging on the couch like Jabba the Hut. Oh man, I just pictured Jabba the Hut wearing a Morrissey shirt and black leggings and I gotta say, he looks pretty fierce. Better than I did by a long shot. Dude got ‘tude. Anyway, I made myself chill. I didn’t feel good enough to do anything but I felt too good to sleep. (I don’t sleep unless absolutely necessary. It’s either a flaw or how I’m gonna eventually take over the world.) So, I lounged and read. I read everything!

There was a stack of magazines on our coffee table that had been accumulating for weeks and weeks. I read all 6 of them while listening to Best Coast and Jenny Lewis and guzzling ginger ale. Then I read the new Martin Millar book, The Goddess of Buttercups and Daisies, in one sitting. It’s amazing. It’s so so funny. I kept loudly snort-laughing and Hogie thought I was trying to communicate to him that he should run around the house knocking things over, which he did a super good job of for about fifteen minutes on Saturday. I also read The Martian by Andy Weir, which was sort-of too science-y and technical for me for the first thirty pages or so and then suddenly I was hooked. That book is like crack. But, the best lazy ass thing I did all weekend was that Tim and I marathon-watched the original Star Wars trilogy. We have the original non-fucked with versions in the bonus features of some dvds we bought years ago. They even seemed a bit old and grainy and non-slick. It was heaven.

We started at like three-something and finished sometime before eleven on Saturday night. I can’t remember the last time I watched all three. I’ll throw in Return of the Jedi every once in a while to get my Ewok fix but, man, I gotta say, watching these films this weekend was pretty fresh. It had been long enough that I felt like I was watching from a different perspective. For example, I cared about the plot. I was so young when I saw these for the first time that I think the movies infiltrated my psyche. I’ve always seen them as a collection of cool characters, neato battle scenes and bitchin Leia hairdos. I remember going to see Return of the Jedi in the theatre with my cousins when I was seven or eight. I loved it. But, I don’t think I loved it for the story. I loved it for the fighting teddy bears and the pretty ass-kicking princess and the dude whose head is also a nifty scarf. (Bib Fortuna) Now I love it for the story. I love that Princess Leia is ultimately responsible for taking down the Death Star and basically every other Storm Trooper. I like the whole damn thing, you guys.

Important thoughts I had or things I said to Tim while watching the original Star Wars trilogy:

Someone should put C3PO in a closet.

Jawas are Ewoks who got super into Enigma

Oooh, Luke with the burn!

Sorry I root for the AT-ATs, I can’t help it.

When you take control of the Millenium Falcon, you automatically get a little vest. 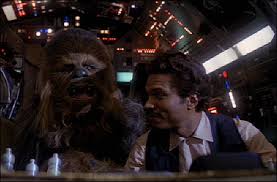 So, yeah, I was sick but it was basically an awesome weekend. And I’m feeling better today so I think it’s reasonable to say that Star Wars cured me.